Here at Cooking Rage we live our lives in a constant state of rage at the system, so we get a lot of head colds.

You’d think that we would be used to being sick by now, but no. We’re not immune to the day-glo fascist currently representing the Republican ticket, or the human flushing sounds that run the empire Roger Ailes built out of the ruins of the American educational system. Being sick all the time, you’d think we would be too weak to go around stabbing everything that is orange with a steak knife while screaming “AILES, YOU MOTHERFUCKER!”

But we aren’t too weak to do that. We do that almost nightly. How? Because we make this soup. It’s our secret defense, like a wall built by Mexicans to stop all the raping. What? YOU’RE FIRED! This soup is the greatest! It’s the best soup! It’s the smartest soup! It’s the soup that will make you forget you have limited access to health care! This soup has the best brains! It can even help soothe the headache you get from living with the constant fear of being shot in a shopping mall! So make it! Make the soup, or the terrorists win!

Ingredients for Cures What Ailes Ya Chicken Soup with Matzo Balls

Instructions
There are 3 things you have to do to make this soup.
1. Make stock.
2. Make matzo balls.
3. Make soup.
It’s not that hard, but might look intimidating, like an old white guy in a suit. So be like Megyn Kelly and don’t let that stop you. And then please don’t be like Megyn Kelly in any other way. 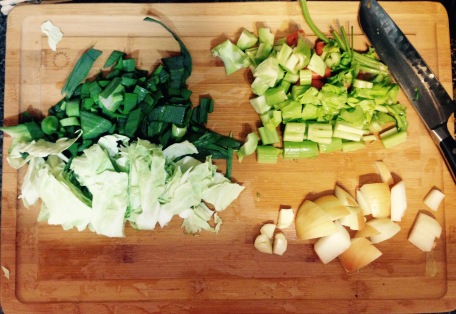